Posted at 08:04h in La Bostik, Notícia destacada a la home by NauBosTik 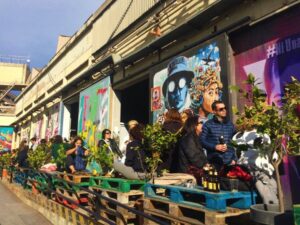 Barcelona is packed with leftovers from the Industrial Revolution. Poble Nou for example is a popular neighbourhood where many old factories are getting a new purpose and it’s upcoming and trendy.

Nau Bostik, in the La Sagrera neighbourhood, is not as well known but it’s still an awesome example of how Barcelona is converting industrial leftovers into contemporary cultural centres. Located in an old glue factory, Nau Bostik hasn’t had much of a makeover. It’s edgy and slightly ruinous, covered with art by the best street artists from Barcelona!

It’s an open space and the idea is that it’s used for social and cultural activities for the neighbourhood. But the space is way too cool to use it just for neighbourhood parties. That’s why every month there are several recurring events going on that attracts the trendy and young crowd of Barcelona. For example the monthly edition of Barcelona Vintage Market, with food trucks, great music and of course lots of vintage clothes!

Eat Street is another popular Barcelona event that’s usually hosted in Nau Bostik. It’s a street food festival that has a different theme every single time.

Both events are worth visiting; check their websites for the new dates! The Facebook of Nau Bostik gives a good overview of the current events and exhibitions.

With the edgy street art and the impressive abandoned factory building as a background it has turned into one of Barcelona’s most trendy (and very photogenic) locations!

Share on FacebookShare on TwitterShare on Linkedin
No t'ho guardis per a tu sol!